This page was written in 1998 and updated last in 2002. A more up to date biography is on his bio page that was used at the recent First World Conference on Science in the Triathlon in Alicante Spain. Jan has also written a book on swimming that is now an ebook. Here is a link to this book which has some more information about the success of his current athletes.

Dr. Jan Olbrecht is the author of this site. He is one of the world's experts on the use of lactate testing in sports training. Jan lives in Overijse, a suburb of Brussels, with his wife Pascale and their two daughters, Siel and Fran. Dr Olbrecht received a Doctor of Sports Science in physiology and bio-mechanics at the Germany University of Sports Science in Cologne. He speaks four languages, has received rewards for sports science in Belgium and other countries, is a teacher at the German Trainer Academy and is a consultant for scientific monitoring of training for athletes from Belgium and other countries.

Dr. Olbrecht currently works in medical research and is a sports consultant to world class athletes. He is quietly building an impressive reputation with new ideas on the training of athletes, working mainly with athletes from Belgium and Holland.

The techniques he used were developed while he was at the Sports University in Cologne. Dr. Olbrecht uses a new model of human performance that characterizes athletic performance from four primary perspectives. Using this information he builds a profile of the athlete's strengths and weaknesses from which he recommends training plans to eliminate the weaknesses. 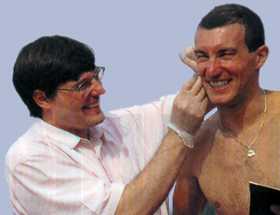 Dr. Olbrecht's primary method of testing and the basis for his information are lactate tests. While many sports physiologists will use lactate results to plan training he goes a giant step further and uses these results in a very unique way. Dr. Olbrecht discovers what it is in the athlete that produces these results. He will tell you what is in the black box that produced a certain lactate result. To do this he uses a computer simulation program validated with over 1000 athletes.

While all this sounds very academic and theoretical, Dr. Olbrecht has produced results in the market place of sports. He has worked for several years with Luc Van Lierde, holder of the Ironman World Championship record (Hawaii 1996) as well as holder of the fastest Ironman ever ran (Ironman Europe 1997) winner again in 1999 of the Ironman World Championship. While his work with Luc Van Lierde is impressive, Jan has also worked with several world class swimmers in Belgium and Holland.

In the World Swimming Championships in Perth in January 1998 five swimmers in the finals including three medal winners were under the testing program of Dr. Olbrecht. Brigitte Becue from the Belgian team and Marcel Wouda, Pieter van den Hoogenband, Kerstin Vlieghuis and Inge de Bruijn from Holland all made the finals in Perth. Wouda won a gold medal and a silver medal while van den Hoogenband and Vlieghuis won bronze medals. The Dutch swimmers are coached by Jacco Verhaeren, coach of PSV Eindhoven.

In the 2000 Sydney Olympics van den Hoogenband won 2 gold medals, swam the fastest 200 m relay split in history and set world records as he beat Ian Thorpe of Australia in the 200m freestyle and Alexander Popov in the 100 m freestyle. In the 100 m freestyle he became the only man to ever swim the 100 m free faster than 48 seconds (47.8). The Dutch also won 2 relay medals in the Olympics, the first ever as the Dutch women won the silver in the 400 m free relay and the men won the bronze in the 800 m free relay. In the 2001 World Swimming Championships, the Dutch men's 4 x 100 m relay swam the 4th fastest race of all time and beat the US relay team for the first time ever. Their time would have won every Olympics except for Sydney 2000.

Dr. Olbrecht also works with other world class athletes. Kathleen Smet was 1998 World University Games champion, 2000 European champion in the triathlon, 15th in the Sydney Olympics, 2nd in the 2001 South African Ironman and 6th in the 2001 World championship. He has worked with Lieve Slegers who has placed third in the New York marathon and with world champion motocross racer, Joel Smets.

Jan, himself, was a Belgian record holder in swimming and swam in three World Championships.